HISTORY AND GROWING UP 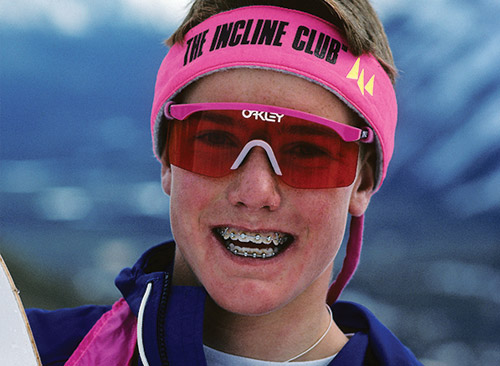 Born in Vail, Colorado, I learned to ski at a very early age and have been involved in winter sports my whole life. I moved with my family to Bend, Oregon in 1976, and began snowboarding in Moon Boots, of which the flex was determined by the number of wraps of duck tape. I eventually evolved to Sorrels!

Growing up in Bend in the early years was the best. Riding powder with my friends and having fun were top priority. It’s funny, that’s still top priority! Mt. Bachelor was a mecca for shredders in the early years. I grew up chasing guys like John Caulkins, Kris Jamieson, Chris Karol, Mike Ranquet, Todd Van Belkum and Craig Kelly.

I began competitive snowboard racing as a junior in the amateur ranks. Meeting with success at local events, I moved on to participation in the Northwest Race Series, where I won the majority of events, along with my friend Tad Dobson, and was the Northwest Series Overall Champion two years running. 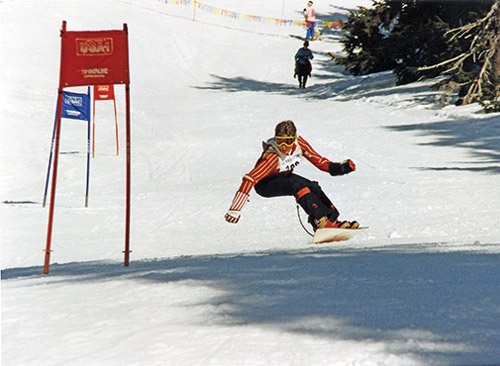 In the early years, of competitive snowboard competition, boarders took part in all of the events which included giant slalom, halfpipe, moguls, and slalom. Because of the huge amounts of snow in the Northwest when I was growing up, most of the alpine events (G.S. and S.L.) ended up being banked slaloms, which were a lot of fun. One of my favorite events was the famed Mt. Baker Banked Slalom, which I won three times as a junior/amateur. I think competing in all of the disciplines early on in my snowboarding career really helped me develop as a strong, all-around rider.

My first big competition was the North American Championship at Sunshine Village, Banff, Canada where I placed second in the junior halfpipe competition on my Sims Terry Kidwell. That spring I traveled to Stratton, Vermont for my first U.S. Open and finished second in the mogul event to J.J. Collier and second in the slalom. Jeff Brushie beat me by two seconds in the slalom. At Snow Valley, California in 1989 I was named the U.S.A.S.A. National Amateur Champion in Slalom and Super-G. Shortly after I began competing professionally on the P.S.T.A. Tour, as a sixteen year old high school sophomore, and claimed my first tour victory at Hunter Mountain, New York, 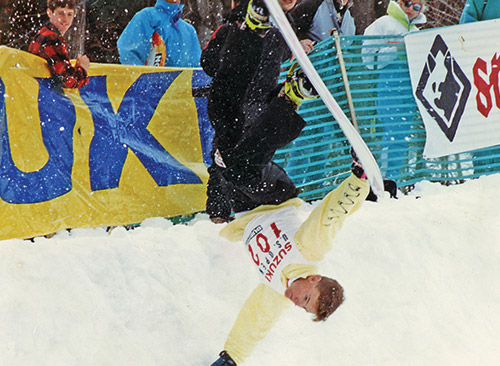 winning a check for $4,000. In 1991 I became a full-time professional, and participated in my first World Cup event in Garmish, Germany finishing eighth in slalom.

This season marks my eleventh year on the World Cup circuit. In that time I have had four World Cup victories, three Grand Prix wins, five National titles, a U.S. Open Victory and a sixth place in the 1998 Winter Olympics in Nagano Japan. I have had a unique opportunity of being a part of snowboarding’s evolution from wooden boards with bungee strap bindings, and leashes that extended from the tip of the board to your front hand, to state-of-the-art equipment, and the arrival of snowboarding competition in the Olympic Games. Through all of this change, I still love to snowboard. This is why I continue to do it! I have been so fortunate to have met the best of people in this sport, and to enjoy together the best sport!”

Chris Klug Foundation advocates for organ and tissue donation, and inspires those touched by transplantation.

Through our programs we reach tens of thousands of young people each year, equipping them with facts about organ donation so they can make educated decisions.

Be sure to check out our annual celebration of life event, Summit For Life!
Learn More

Chris has spent plenty of time exploring mountain communities around the world and his favorite the Elk Mountains in Aspen and Snowmass, Colorado.

Proud to be a licensed Real Estate Professional with Aspen Snowmass Sotheby’s International Realty, he is committed to bringing the same enthusiasm, commitment and integrity to his real estate activities that made him an Olympic Champion.
Learn More

Chris shares his inspirational story as a professional corporate and motivational speaker. He shared his message with thousands at over five hundred events nationwide the past decade.

His snowboarding career and transplant experience has provided Chris a tremendous platform to help inspire others with his story.